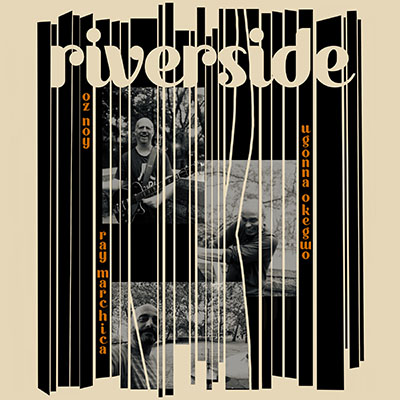 Oz Noy, Ray Marchica and Ugonna Okegwo are pleased to present Riverside, out on January 21, 2022 via Outside in Music. Their first release as a trio, Riverside is a fresh, life-affirming collection of standards that stems from the group’s spontaneously assembled outdoor jams held in Riverside Park, New York City during lockdown.

As individuals, this dynamic trio has a wide range of performing credits – Okegwo as a celebrated sideman with Jacky Terrasson and Tom Harrell, Marchica as a Broadway and session player (plus two albums as a leader) and Noy as one of fusion’s most sought after individual voices. All three have worked on the New York scene for the past two decades, so when the COVID-19 lockdown hit, it was a huge blow to both their livelihoods and their creative spirits. Then, summer came around, and the chance presented itself for housebound musicians to meet up and play outdoors. Oz called upon his neighbors Ugonna and Ray and invited them down to the park for a jam session – Ugonna on upright, Marchica with a small drum set, and Noy on electric guitar, with a battery-powered amp.

Their spot was pretty picturesque. “We set up perfectly: you could look down to the Hudson River, and then across to New Jersey – it was a lovely environment being there,” reflects Okegwo. It helped the group find a sound too. “It was almost like a little venue,” says Noy, and they weren’t the only ones taking advantage of the accidental bandstand-like coves the park is blessed with. “There were multiple little stages, some people playing bluegrass, some classical. When we started playing, there was nobody in the park, but by October time, people were thinking ‘oh, maybe we can do this too’. We were pioneers,” says Marchica.

The sessions went on through the summer months until the weather turned in October. But instead of packing up entirely, the group went into the studio, satisfied that they had created a sound, and a feeling amongst the group. “It saved me, it saved all of us – musically and mentally,” says Marchica.

The beauty shines throughout the trio’s creative, yet hands-off, arrangements. “All The Things You Are” opens with a Monk-ish kilter, Noy breezily sweeping over the changes and into some mysterious territories, particularly in the vamped ending, which stretches time effortlessly. “Anthropology” nimbly tiptoes through Charlie Parker’s choppy lines, and “Have You Met Miss Jones” continues the rhythmic trickery, skidding along as Noy veers between lithe straight playing and relaxed swing.

“Billie’s Bounce” is given a makeover by Noy, who ‘figured out a way to play it as a ballad, a slow blues harmonized in a different way’. “Riverside Blues” adds another dimension to the record, a shuffling 12/8 blues-rock written at one of the jams in the park.

“6/8 Lunch Break” is a chance for Marchica to strut his stuff on an extended solo interlude. Then comes an intriguingly free-form take on “Out Of Nowhere” that embraces the opaque, before a barnstorming take on “Donna Lee”, where Noy shows serious chops. It’s arranged sparsely, letting solo contributions from Noy and Marchica unfurl naturally before an abrupt full stop brings the trio to a halt.

“This Could Be a Start of Something Big” is apt for the group; in what was Okegwo’s first encounter with the standard, the group’s arrangement grew organically week-by-week, in tandem with the rapidly developing bonds tying the trio together. The album ends on a different note – “Sunny” injects Bobby Hebb’s classic track with a healthy dose of musical serotonin, in a rocking, soul-fuelled cover that transports the group right back to where they started – the sun-soaked surroundings of Riverside Park. Who Gives A Funk